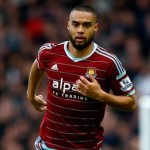 It has been reported that West Ham United are prepared to sell Winston Reid in January.

The Daily Mail reported that West Ham are bracing themselves for offers on Reid who has attracted interest from Arsenal and Everton.

The New Zealand international is out of contract in the summer and the chances of him agreeing a new deal look slim.

West Ham are reluctant to sell but will do should someone offer £6million or more in the January window.