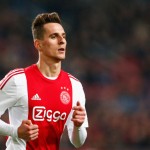 A report from Polish publication Futbol News suggests that the Gunners see the 22-year-old striker as the perfect successor for Olivier Giroud.

Poland international Milik has been prolific for the Dutch giants, scoring 42 goals in 69 appearances since initially arriving on loan from Bayer Leverkusen in 2014.

The former Augsburg loanee’s form in Holland has already alerted the likes of Barcelona, Juventus and Inter Milan while Premier League clubs Leicester City and Everton have also been credited with an interest.

Milik has been in fine form for Frank de Boer’s side this season, netting 16 goals in 25 Eredivisie outings.