It has been revealed that Arsenal are watching Anderlecht striker Aaron Leya Iseka. 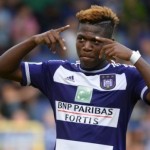 According to reports from Calciomercato.com, The 17-year-old has already made nine league appearances for the Belgian outfit, catching the eye of some of Europe’s top clubs.

Arsene Wenger is keen to bring in another striker to provide competition and injury cover for Olivier Giroud and Theo Walcott.

Iseka is currently sidelined with a serious knee injury that he suffered in the Belgian side’s UEFA Youth League clash with SK Brann.