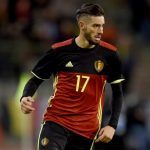 Reports are out claiming that Arsenal are interested in Atletico Madrid wing-back Yannick Ferreira Carrasco.

The Daily Express reported that Arsenal have spoken to Atletico Madrid about Carrasco.

Recently named in Marc Wilmots’ Belgium squad for Euro 2016, Carrasco was an important part of Atleti’s team that reached the Champions League final.