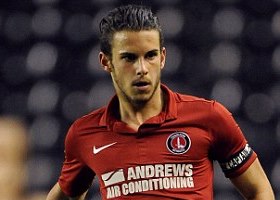 Reports are out claiming that Arsenal are interested in Charlton Athletic midfielder Diego Poyet.

Poyet is the son of Sunderland boss Gus Poyet and regarded highly inside English football.

The Mail on Sunday revealed that it has been suggested Diego will move to join dad Gus at Sunderland but Arsenal have also shown an interest in the player.