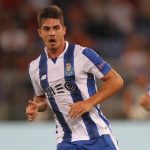 But there is a significant problem for the Gunners to overcome if they’re to bring Silva to the Emirates.

Porto recently tied him to a new five-year deal that includes a whopping £52m release clause.