It has been reported that Arsenal and Tottenham are chasing Ajax centre-half Joel Veltman. 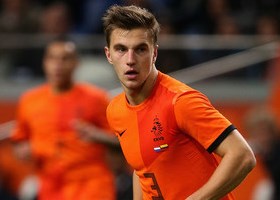 The Telegraph reported that club captain Thomas Vermaelen is widely expected to depart this summer and the Gunners are considering a number of replacements, with the Ajax man high on their wishlist.

However, Spurs are also interested and feel their relations with the Dutch club strengthened when they signed Jan Vertonghen in 2012.

Veltman was awarded his international debut in November last year and will be hopeful of making this summer’s World Cup.

Arsenal Drop Out Of Race To Sign Esteban Granero