Reports are out claiming that Premier League giants Arsenal are reportedly eyeing a move for Anderlecht wonder-kid Aleksandar Mitrovic. 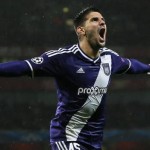 Mitrovic has emerged as one of the finest young strikers in the world since his move to Belgian side Anderlecht from Partizan Belgrade two seasons ago.

Following another fine campaign this term, it is widely believed that the youngster will earn a big money move to one of the top leagues in the world during the upcoming summer and a host of clubs have been linked with a swoop for the Serbian international.

Now according to reports from The Sun, the Gunners have joined the race to sign Mitrovic and are planning a £10million offer to sign the 20-year old. Joel Campbell : I Want To Play For Arsenal!