Reports are out claiming that Arsenal are eyeing Schalke fullback Sead Kolasinac. 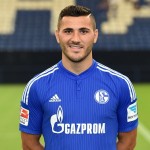 The 22-year-old has been hit by injury issues over the past few months and was restricted to just six appearances last season.

Despite Kolasinac’s fitness concerns, the Italian publication claims Wenger is getting ready to make an offer.

The Bosnia international has been at Bundesliga big guns Schalke since coming through their youth ranks.

Per Mertesacker : My First Season At Arsenal Was Tough!