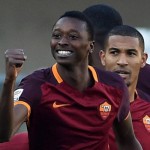 Reports are out claiming that Arsenal are set to face competition from Borussia Dortmund in their efforts to sign Roma youngster Umar Sadiq.

The Sun is reporting the Gunners have tabled a £13million offer for the 19-year-old Nigerian.

However, Arsenal are not alone in the race to sign Sadiq, with the player’s agent revealing Bundesliga giants Dortmund are also in the hunt to recruit the player.

“Yes we have been approached by Arsenal, but they are not the only team interested in Sadiq as Borrussia Dortmund are also pushing for him,” Sadiq’s agent Mohammed Lawalb said.

“In the coming days or weeks we will know where he is heading to, but for now he is very happy and focused at Roma.”