It has been reported that Fiorentina have expressed interest in Real Madrid midfielder Sami Khedira. 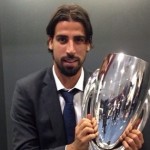 AS reported that Fiorentina are prepared to offer the Germany midfielder a deal worth €3.5 million-a-year and hope to tempt Real to sell for €10 million.

Khedira is also a target for Premier League side Arsenal and is inside the final year of his current Real deal and has refused to consider talks over a new contract.

Fiorentina are confident Real will sell now rather than lose Khedira to a pre-contract in January.