It has been reported that the Europe-wide race for Atalanta midfielder Franck Kessie is heating up. 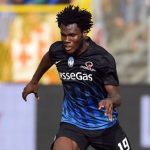 The Sun says Chelsea and Arsenal face a battle on their hands to sign youngster Kessie as Juventus step up their interest in the Atalanta midfielder.

At just 19-years-old, the Ivory Coast star is already making a big impact on the game in just his first season playing in Italy’s top-flight.

Chipping in with six goals in all competitions, the powerful central-midfielder has been a mainstay for Atalanta this season, as his side sit sixth in Serie A.

Arsenal have been watching him regularly this season, but it is believed the Italian champions are leading in the efforts to add Kessie to their ranks.

Andre Santos On The Verge Of Arsenal Return