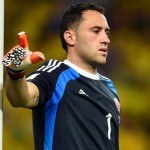 L’Equipe reported that Valencia have made a last-minute bid for Colombian goalkeeper Ospina.

The 25-year-old – who plays his club football with Nice – has been a target for Arsene Wenger for some time with the Gunners said to have agreed a £3.2million fee.

However, the La Liga outfit hope to hijack the transfer with another unnamed Spanish side also eyeing a deal.

Aaron Ramsey Had a Successful Surgery