Interesting transfer news are out claiming that Liverpool are making a sensational move for Barcelona star Alexis Sanchez. 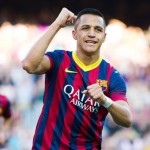 The Daily Star Sunday reported that the Reds want Alexis in an £18million deal as they build up their squad for a return to the Champions League.

Liverpool – like Arsenal – have been told Sanchez wants to quit Barca because he wants more starts.

A deal won’t be done, though, until Sanchez, 25, has played for Chile at the World Cup.