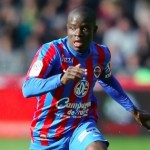 Marseille, reports France Football, have been in negotiations with Caen over Kante for some weeks.

OM believed they had an agreement worth £3.5 million for Kante.

However, Arsenal have now stepped in and are ready to blow OM out of the water for the youngster, who has been likened to Claude Makelele.

The Gunners are willing to offer £7 million to land the Caen prospect.