Reports are out claiming that the agent of Lorenzo Insigne says the Napoli attacker has fielded English interest. 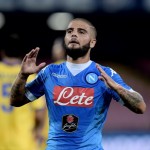 Speaking to Radio Punto Zero, Insigne’s representative says his client could have followed a similar path, but preferred to remain in Naples.

“Insigne has always been a symbol for the Azzurri, even in the youth teams,” Fabio Andreotti said.

“When he wasn’t yet under contract there were English teams who would have showered him with money, but he chose to stay at Napoli.

“He made the same choice after a year at Pescara, when there were so many teams interested. His is a nice story to tell.”

Premier League club Arsenal are said to be interested in the talented attacker. Jose Antonio Reyes : I Always Hope For The Best For Arsenal!