It has been reported that Hull City and Stoke City are battling for Udinese midfielder Emmanuel Agyemang-Badu. 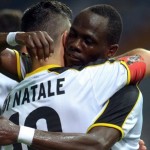 The Mirror reported that the defensive midfielder wants to quit Italian side Udinese for the Premier League in the January transfer window and could be available for around £4million.

The 23 year old has been coveted in England since he impressed for Ghana at last summer’s World Cup, particularly in games against Portugal and Germany.

Arsenal, Tottenham and most recently Liverpool have all expressed an interest, but the player wants regular first team football and is believed to favour a move to either Steve Bruce’s FA Cup finalists or Mark Hughes’ Potters.

Udinese bought Agyemang-Badu from Ghanaian outfit Bekerum for a bargain fee of around £450,000 in 2010, after the player had unsuccessful trials in England with Middlesbrough and Wolves.