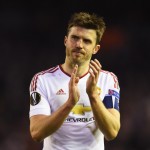 The Daily Express says Arsenal, West Ham and Everton are all reportedly set to go head-to-head this summer for United midfielder Carrick.

The England international is out of contract at the end of the campaign and looks likely to leave Old Trafford after 10 years at the club.

Despite turning 35 in July, Carrick has shown little sign of slowing down, having made 24 Premier League appearances this season.
– See more at: http://www.tribalfootball.com/articles/man-utd-veteran-carrick-wanted-by-three-premier-league-rivals-4125455#sthash.ryo4IpKF.dpuf