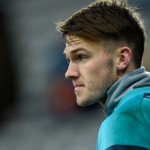 Reports are out claiming that Southampton are reportedly interested in Newcastle United’s hot prospect Freddie Woodman.

The highly-rated 18-year old goalkeeper was on the radar of Manchester City and Arsenal before he decided to move to St James’ Park.

The Saints are understood to have watched him playing for the Magpies’ U21 side this season and plans to bid for the Toon starlet in the summer according to the Chronicle.

But Newcastle have Woodman under a long-term contract and are likely to hold out against any bids.