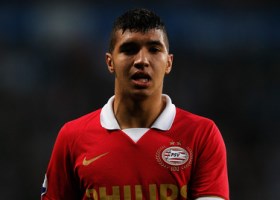 The Daily Star reported that Manchester United, Manchester City, Chelsea and Arsenal are all huge fans of the 17-year-old Belgian winger.

The Belgium U21 international has banged in three goals in nine PSV games this season but is still not old enough to sign a pro contract.

And the English giants want to nip in and lure him to the Premier League, according to sources on the continent.

Laws in Holland prevent young players signing contracts until they are 18.