Interesting transfer news are out claiming that Tottenham are moving to trump Arsenal for Real Madrid striker Alvaro Morata. 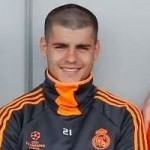 The Daily Express reported that the Spanish youngster has long been linked with a switch to the Emirates, and Arsene Wenger believes he has the potential to become one of the world’s best forwards.

However now Tottenham are keen and feel Morata is more than capable of challenging Emmanuel Adebayor for a place up-front.

Spurs would be willing to take the youngster just on loan if it meant blocking the Gunners’ move for him.