Reports have emerged claiming that Arsenal face competition from Tottenham for AS Roma striker Mattia Destro. 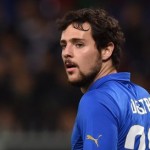 Gazzetta dello Sport reported that Arsenal are in talks with Roma over a potential move for Italian striker Destro.

The Gunners are due to meet with the 23-year-old’s representative Claudio Vigorelli this week.

But they could face competition from north London rivals Tottenham for the player’s signature.

Destro is frustrated over his failure to become a first-choice for Roma coach Rudi Garcia this season.