Reports are out claiming that Tottenham are challenging Arsenal for Toulouse fullback Serge Aurier. 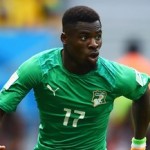 The Daily Mail reported that Arsenal have long been considered favourites for his signature while Marseille have also shown an interest but Tottenham hope to steal a march over the coming days.

The Ivory Coast international has not been shy talking up the prospect of moving to the Gunners.

But the availability of Newcastle United fullback Mathieu Debuchy has seen the Arsenal trail turn cold.