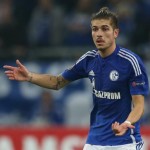 It has been reported that North London rivals Tottenham Hotspur and Arsenal could be involved in a tug-of-war for Schalke’s Roman Neustadter this summer.

According to reports from Bild, both Spurs and the Gunners are keen on the defensive midfielder who comes out of contract at the Veltins-Arena this summer.

Neustadter, 28, is just as comfortable at centre-back which makes him an attractive proposition to interested clubs, in particular Arsenal who are set to get rid of Mikel Arteta, Mathieu Flamini and Thomas Rosicky at the end of the season.

The fact he would also shore up central defence would please Arsene Wenger who is pondering what to do with German veteran Per Mertesacker.

Tottenham boss Mauricio Pochettino is planning to reinforce his squad for the Champions League and feels a player such as Neustadter would add a considerable amount of depth to his current roster.