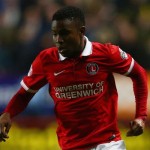 Reports are out claiming that Tottenham and Southampton remain keen on Charlton Athletic prospect Ademola Lookman.

The Daily Star Sunday says the Addicks striker, 18, penned a new deal in January that included a release clause.

Lookman can move on if Charlton lose their Championship status – and that will once again spark Premier League interest.

Tottenham are the frontrunners but Ronald Koeman is also keeping an eye on developments over at Southampton.

Ademola Lookman is also on the radar of Arsenal.