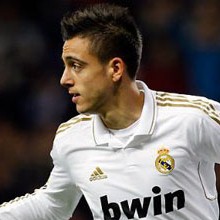 Reports are out claiming that West Ham United have offered £4 million for Real Madrid striker Joselu.

Joselu has also been linked with Arsenal, but AS reported that the Hammers have shown the keenest interest.

It is said that the newly promoted Premier League side have made their offer and also agreed a buy-back option in negotiations with Real – which would be £1 million in 2013 and £1.5 million in 2014.

However, Real are reluctant to lose Joselu from their Castilla team and will only consider selling for £8 -10 million.

Emmanuel Frimpong : I’m Happy To Be Back!