It has been reported that Arsenal have suffered a major injury crisis ahead of their Champions League tie with Galatasaray. 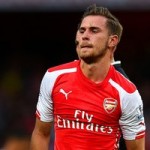 Gunners boss Arsene Wenger has confirmed Aaron Ramsey, Jack Wilshere and Mikel Arteta are out for the next week, meaning the injured trio will miss Arsenal’s Champions League match against Galatasaray on Wednesday.

All three are likely to be absent for Arsenal’s Premier League clash with Chelsea next Sunday after picking up injuries during the 1-1 draw against Tottenham Hotspur at the Emirates.