It has been revealed that Arsenal failed with a late attempt for Leicester City star Riyad Mahrez last week. 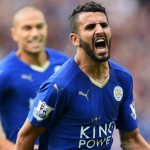 The Algerian has started the season in blistering form and is joint top of the Premier League goalscoring charts with four goals to his name already.

The Gunners’ interest ultimately came to nothing though and they ended the transfer window without making any additions to their outfield squad.