Reports are out claiming that Arsenal fans were filmed vandalising White Hart Lane. 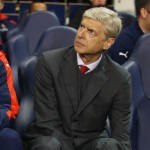 The Mirror claims that a minority of Arsenal supporters defaced White Hart Lane after the Gunners’ Capital One Cup third round win over Tottenham.

Fans were pictured ripping signs down in the away section of the stadium.

They were also reported to have clashed with stewards at full-time.

Ten people were arrested following the north London derby relating to a range of suspected offences, such as assault, criminal damage and public order.

A Mathieu Flamini brace gave the Gunners victory over Tottenham and set up a fourth round trip to Sheffield Wednesday.