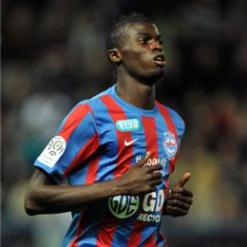 Interesting news are out and it has been revealed that Arsenal are now favourites for Caen striker M’Baye Niang.

Sky Sports claim that the Gunners have struck terms over a fee with Caen for the teenage French sensation.

Premier League rivals Tottenham and Manchester City are among a clutch of clubs chasing the 17-year-old.

But Gunners boss Arsene Wenger made his move to sign £5m-rated Niang after the striker enjoyed a successful trial at London Colney last week.