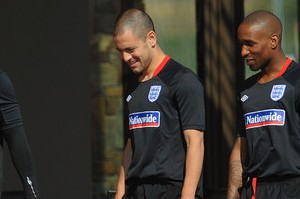 Interesting news are out and it has been reported that Arsenal are favourites to land Chelsea contract rebel Joe Cole.

It has been reported that Cole will return home from the World Cup and join Arsenal on a free transfer.

The England midfielder took the heartbreaking decision to leave Chelsea after failing to agree a new contract in the final months of the season.

His primary reason for leaving Stamford Bridge after seven years at the club was growing concerns about his chances of regular first-team football under manager Carlo Ancelotti.

He is expected to sign a four-year contract at the Emirates in a deal not dissimilar to the one Sol Campbell signed when he joined from Spurs on a free in 2001.That will see Cole’s potential earnings hit £100,000 a week.

It represents a great piece of business by Arsenal manager Arsene Wenger, who has seen off competition for Cole from Champions League rivals Manchester United and Tottenham.

Manchester City and Liverpool were also in the hunt for the 28-year-old, but it favoured Arsenal that Cole is settled living in London.