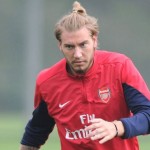 It has been reported that Newcastle United boss Alan Pardew is chasing Arsenal striker Nicklas Bendtner.

It is said that the Denmark international striker will need to take a significant wage cut to fit into the structure at St James’ Park.

Bendtner is out of contract on a reported £60,000-a-week deal at the Emirates but may need to take as much as a 50% cut for Pardew to be able to convince owner Mike Ashley to do business