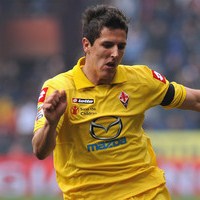 It has been revealed that Arsenal boss Arsene Wenger is chasing Fiorentina attacker Stevan Jovetic.

The Sunday Express says Wenger is understood to have Fiorentina striker Jovetic as his No.1 target, but he faces competition from Chelsea for a player who is also valued at around £25m.

Borussia Dortmund’s Polish ace, Robert Lewandowski, 23, is believed to be next on the list.