Reports are out claiming that Carl Jenkinson is enjoying his football at West Ham United. 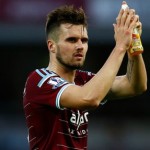 The England international hinted his long-term future could be with the Hammers rather than Arsenal, after suggesting the club may be able to match his own ambitions.

“It’s a club going in the right direction which is the reason why I signed,” he said.

“The players that were brought in and the stadium West Ham are going to be moving into the season after next it’s an exciting time to be a West Ham player to be honest.” I want to stay at Arsenal – Podolski