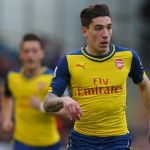 It has been reported that Hector Bellerin has no regrets leaving Barcelona as a teenager for Arsenal.

The 20-year-old moved to north London in 2011 but had to wait over two years for his first-team debut.

“I’ve got my family over here as well so I’m really settled in the club. I’m really enjoying myself.

“I left there as a kid and now I feel like a man. I’ve grown up a lot because I left at 16 to come to another country, another culture.

“You really have to grow up and there’s a lot of things that have changed.

“When I was there I used to play as a winger and now I’m playing as a defender. I feel I’ve grown up on and off the pitch and I feel really confident now as a right back.

“I’ve only played there for four years but I’m feeling really confident that I can play there, and that I’m proving to everyone that I can play in the Arsenal first team.”