Arsenal fullback Kieran Gibbs has admitted that he is excited by the arrival of Mesut Ozil. 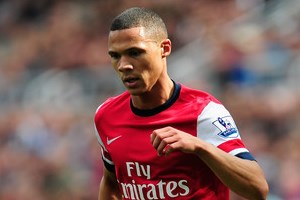 The England international fullback believes Ozil’s arrival echoes that of Dennis Bergkamp, whose signing in 1995 helped spark a long period of success for Arsenal.

Gibbs told Arsenal Player : “I’m very excited, when a world-class player comes in and joins you’ve got to be excited,”.

“I’m sure he’ll settle in quickly because we’ve got Lukas [Podolski] and Per [Mertesacker] with him to get him settled so it shouldn’t take him too long. I’m really looking forward to working with him.

“He’s got a clinical side to him and technically he’s world-class. He’s going to create a lot of problems for opposition we come up against and hopefully he can continue the form that he had with Real Madrid.

“He’ll still have work to do to match Dennis Bergkamp and what he’s done for the Club. But he’s a world-class player and he looks very determined to come and help the team out.”