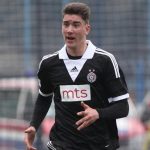 Reports are out claiming that Partizan Belgrade striker Dusan Vlahovic is a target for Arsenal.

The Mirror claims that they are ready to see off Juventus for Vlahovic.

Billed as the next Zlatan Ibrahimovic , the Serbian striker is just 16 and technically gifted, but also 6ft 3in tall and powerfully built — drawing comparisons with the Paris Saint-Germain legend.

Arsenal scouts have watched him since last summer and, despite his age, Vlahovic has made eight appearances for Partizan this season — scoring once.

His contract runs until December 2018, but a bid of £2m could be enough to bring him to London.