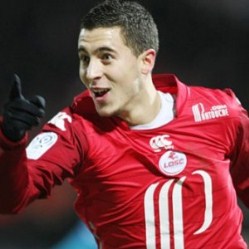 The Belgian admitted last week he favoured a move to England and dropped a big hint he was on his way to Tottenham.