Reports are out claiming that Arsenal scout and former player Luis Boa Morte says fans should be getting behind manager Arsene Wenger. 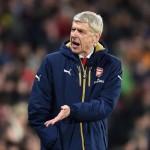 Boa Morte has asked the red half of north London to look at what happened to Manchester United when Sir Alex Ferguson left.

He said: “I believe in the boss. For sure he is going to be there next season.

“Arsene Wenger created the philosophy we have at Arsenal.

“People can talk and protest but I don’t remember any other manager being an Invincible.

“Be careful what you wish for. Look at Manchester United after Ferguson left, who has been successful? Nobody. It is the same thing.

“We can see United’s results and where they are in the table.

“Things didn’t work out, not because David Moyes and Louis van Gaal are bad managers but Ferguson created a pattern, a way to play.

“They couldn’t make the team work the same way.

“Something happened for sure because they stopped winning and now they are struggling to finish in the top four.”