It has been reported that Arsenal goalkeeper Damian Martinez feels ready for his Champions League debut at Anderlecht. 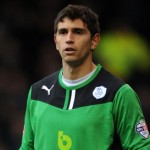 Wojciech Szczesny is suspended after being sent off against Galatasaray and David Ospina injured.

Martinez, who has conceded six goals in two first-team appearances for the Gunners, says he toughened up during a loan spell at Sheffield Wednesday in the second tier last season.

Martinez said: “I’ve been working on being more commanding in the box. I didn’t have any experience before and I went to the Championship, which is all about crosses and making the right decision.

“I learnt a lot because I played nearly 20 games so I’m a completely different keeper now. I was working really hard and I played really well in quite a few wins and gained a lot of experience. Arsene Wenger Ignores Sick Chants : I Don’t Worry About It!