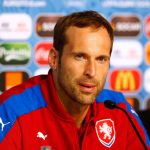 Reports are out claiming that Arsenal goalkeeper Petr Cech has announced his international retirement.

The 34-year-old revealed the news via his official Twitter account on Friday in a tweet that read: “We lived some amazing moments together – Wishing the team all the best for the future #CZE”.

The Czech Republic were eliminated from this summer’s European Championships by Turkey after finishing bottom of Group D with one point, which they secured in their 2-2 draw with Croatia.

Cech admitted after the team’s final group stage game with Turkey, which they lost 2-0, he was thinking about retiring from the international scene.