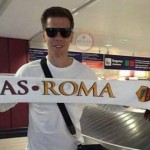 Reports have emerged claiming that outgoing Arsenal goalkeeper Wojciech Szczesny has confirmed his arrival at Italian giants AS Roma, posting a video greeting to his new club on Instagram.

The out of favour 25-year-old has joined Roma on a season-long loan deal from the Gunners, following Petr Cech’s arrival from Chelsea.

Szczesny will do battle with Morgan De Sanctis and Bogdan Lobont for the number one goalkeeping position in the Italian capital.