It has been reported that Arsenal goalkeeper Wojciech Szczesny admits there’s frustration after their 2-2 draw with Manchester City. 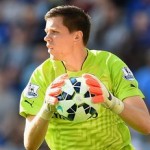 The Poland international spoke to Final Whistle, Arsenal’s Facebook video service, following the 2-2 draw and is confident that his side can react in a positive way against Dortmund.

“There’s always areas that you can improve and we need to do that if we want to collect three points from Dortmund and then in the Premier League.

“I think the fact that we’re very disappointed not to have won the game – we believe we deserved to have won it – speaks for itself.

“I thought we were the better team, we created more chances and we controlled the game for the majority.” Per Mertesacker Insists Arsenal Must Improve Against Tottenham