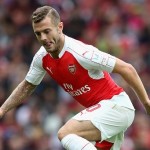 The 24-year-old hasn’t played any football since fracturing his fibula during the pre-season in August, but Hodgson recently indicated that he is inclined towards including Wilshere in his squad for Euro 2016.

However, Parlour believes that the player shouldn’t be taken to France if he fails to prove his fitness.

“I wouldn’t take anyone unless they’re 100 per cent fit,” Parlour told talkSPORT. “I don’t think you can take that gamble.

“They’ll be no rushing back for Jack. Arsenal are taking their time with him, they’re going to get him exactly how they want him before he plays again.

“But if he can get back into the squad and play six games before the end of the season, starts playing on a regular basis and starts showing his form again…Roy has always been a loyal man, and he’ll be loyal to the players who have got England to the Euros.

“I think Jack Wilshere will go if he IS fit, but there’s a lot of competition for places. Roy’s got a real dilemma with who he picks, especially in that midfield area.”