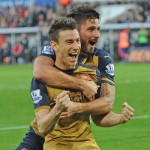 According to reports from the Daily Express, Arsenal have been handed an injury boost in the form of defender Laurent Koscielny’s return to the squad for the North London Derby on Sunday.

The French international was withdrawn from the starting eleven against Bayern Munich on Wednesday due to a hip problem.

Manager Arsene Wenger said Koscielny was in doubt for the clash against Tottenham following the 5-1 defeat to the German Champions, but it is understood the 30-year-old centre-back will start the game on Sunday.