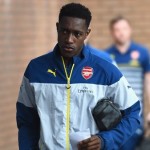 Reports are out claiming that former Manchester United striker Danny Welbeck has claimed that his overall game has improved since his summer move to Arsenal from Old Trafford in summer.

The 24 year old England international star has scored eight times and assisted eight more in his debut campaign for the north Londoners and feels that all the facets of his game have gotten better since joining the Gunners.

Welbeck said: “It’s not just one thing that has improved.

“My all-round game, getting used to the different systems and different players means you learn a lot more, gather more experience and you just develop naturally.

“I’m happy about the move to Arsenal and I think things will go well for me in the future.

“Everyone’s made me feel welcome. The fans have been brilliant as well so they’ve made it very easy for me.”

Welbeck joined Arsenal for a fee of £16million from United last summer.