Reports are out claiming that Arsenal manager Arsene Wenger was maintaining a positive outlook ahead of his side’s Champions League clash with Monaco. 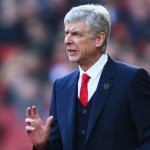 The Gunners meet Leonardo Jardim’s French outfit at the Stade Louis II in the Round of 16 second leg after a crushing 3-1 defeat at the Emirates Stadium late last month.

Everything will have to go right for Arsenal if they are to progress to the quarter-finals of Europe’s premier club competition but Wenger is upholding faith that a near-miracle can be achieved.

“Monaco is in a very strong position, but we have experience, the desire and belief we can do it,” said Wenger.

“We want to give everything to have the greatest performance on the pitch. If we did not believe we could do it, we would not be here.

“The statistics are against us. The result in the first leg is against us. We are conscious about that.

“But no matter how big the percentage (chance) is, we have to give absolutely everything to make the stats lie, that is our desire and belief that we can do it.”