It has been reported that Stoke City boss Mark Hughes has admitted that Arsenal have surprised him this season. 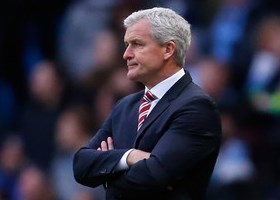 With 11 games to go Arsenal find themselves in second place, just one point behind Chelsea, and that has surprised Hughes.

Hughes said: “It has been surprising I think. It would be fair to say I didn’t expect them to maintain it.

“They have always been an outstanding team and they have great ability within their ranks, but I just felt maybe they wouldn’t have the ability to sustain a challenge.

“I think there are possibly stronger challengers, stronger teams that could take it away from them.”