Arsenal midfielder Tomas Rosicky suggests that they now have enough players with experience to push the club towards the Premier League title.

Czech midfielder Rosicky feels they are well-placed to continue on in their present form despite a recent slip-up when losing 6-3 to Manchester City and being held to a 1-1 draw with Everton. 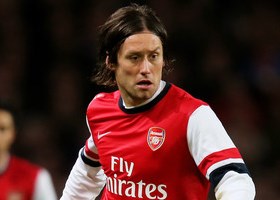 “It was a bit bumpy when we lost against Manchester City and drew against Everton,” he told the club’s official website.

“But you will always have phases like that in a year so that’s nothing new.

“This team has more experience than it did in the past. We have (Per) Mertesacker, (Mesut) Ozil, who won things in Madrid and the other experienced boys like Mikel (Arteta) and (Mathieu) Flamini.

“Plus the English boys are not kids anymore, they gained experience through the years of playing here so that’s why I think we have the maturity to do it this year.

“The most important thing is that you never give up and always try to go for it.

“Like the game against West Ham, yes it will happen that the (other) team will score against you but you always have to carry on and that’s what the boys did. It was very positive.”