It has been reported that Arsenal hero Martin Keown was impressed by Alex Oxlade-Chamberlain’s performance in England’s Euros win over San Marino. 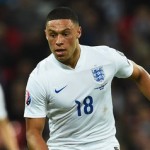 The former England international wrote in the Daily Mail: “When Alex Oxlade-Chamberlain came on, he gave the England midfield a new dimension.

“He wants to play centrally but rarely gets the chance for Arsenal.

“When he plays wide it’s as if he has to prove himself whereas through the middle things come naturally to him.

“On Thursday night he brought something extra and again showed Roy what he’s capable of.”